The word Central Park evokes the images of those in New York. It is one of the most prominent parks in the world. However, there are still a few parks with an identical name. In India there is one in Gurgaon and Jaipur. Central Park is the main park in Jaipur. It was the first park with a dedicated jogging track in the heart of the city. Although the city is blessed with many parks, not many can be this big. The size of Central Park is about 40 acres. My last post about parks in Jaipur was Dravayawati Bird Park, check it out so far if you haven’t already.

Jaipur Central Park was inaugurated on January 21, 2006. It was developed by Jaipur Development Authority with the aim of providing a vast green space in the heart of the city for the public.

It used to belong to the family of the former rulers of Jaipur. A significant portion of the park was part of the Rambagh Palace, a residence of the previous Queen of Jaipur, Maharani Gayatri Devi.

This palace is currently a hotel managed by the Taj group. A significant portion of the jogging track runs along the perimeter of the Rambagh Palace. 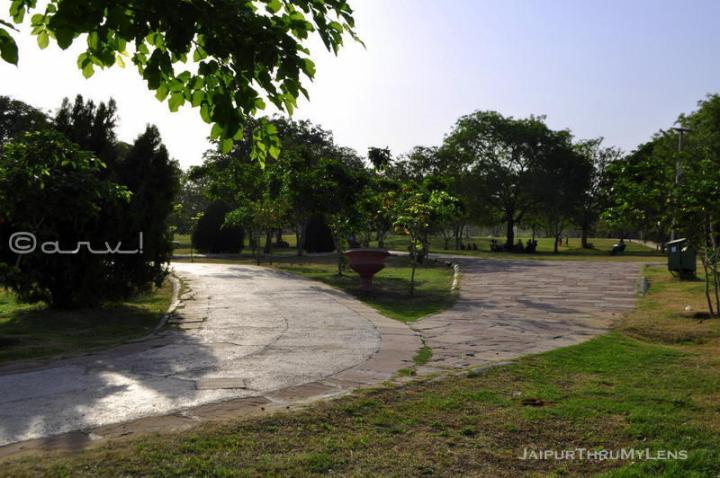 One of the most notable features of Central Park is a huge Indian flag. The flagpole is 206 ft high. This flag measures 72 feet by 28 feet and was inaugurated on October 24, 2011. Until 2011, it was the tallest flagpole in India. Over time, however, there are even bigger ones in other places in India. 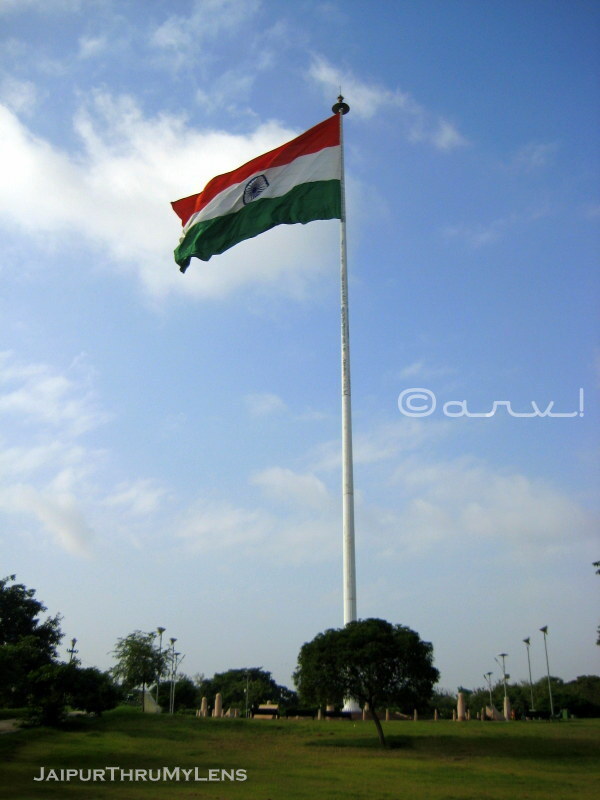 The flagpole is placed on the raised part. There are benches at the base of the flagpole where one can sit and enjoy the atmosphere.

The most iconic image of Central Park, in my opinion, consists of these statutes. 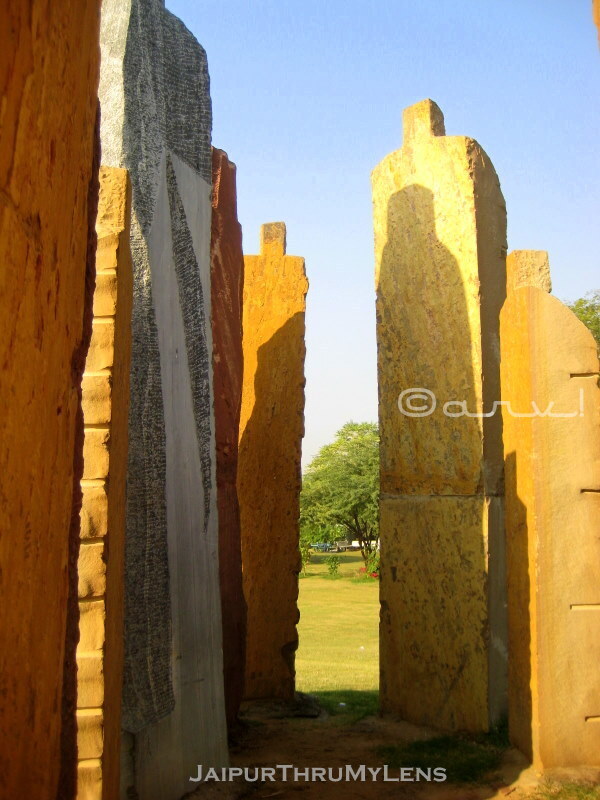 They were installed 12 years ago and the credit goes to the artist Sameer Wheaton, a furniture exporter from Jaipur. These are local stones of Rajasthan and represent a constellation. Here’s a picture of the same. 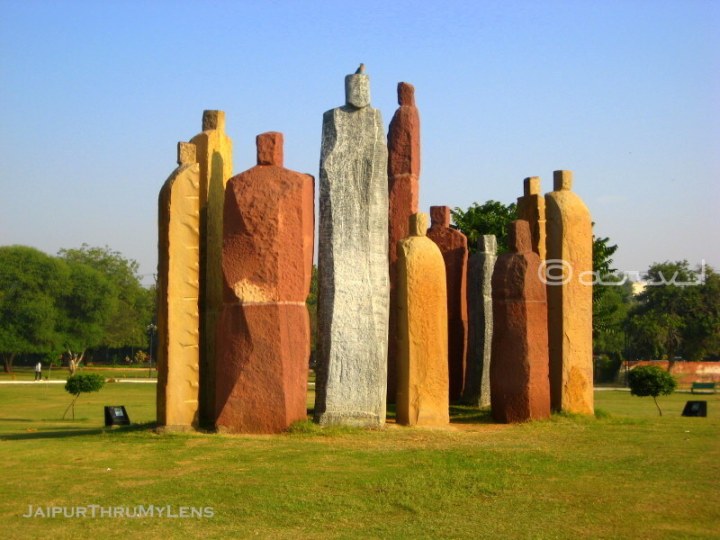 The jogging track in the Jaipur Central Park is 4 KM long. Initially there was only one jogging track, but as the park became extremely popular among joggers and runners, another was added. The new one runs parallel to the original.

This jogging track is unique as it passes through the Jaipur Golf Club and the Rambagh Polo Club. You never get tired while walking or jogging, because the visual element is always changing. Seeing the golfers play or a polo match in progress is a common occurrence.

It’s also one of the reasons runners and joggers prefer Central Park over the parks in their area. The walking path in the park is about 3 km long.

Since a huge number of walkers and joggers visit the park in the morning, it doesn’t help to have two parallel jogging paths. Recently, a recent expansion of the park was added. The secondary area of ​​about 6 hectares was developed after JDA won the same in a lawsuit. This area has long been under discussion in a case with the princely family of Jaipur. 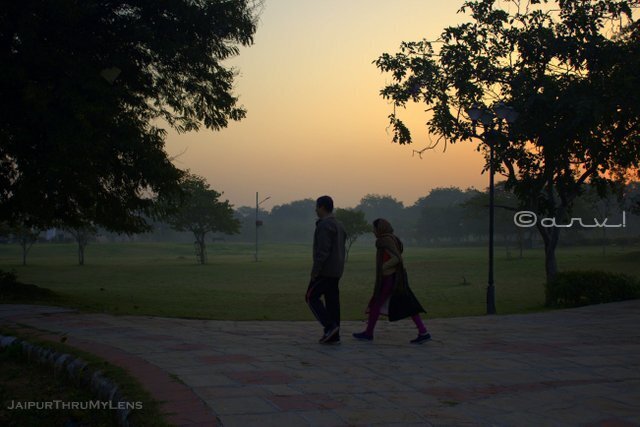 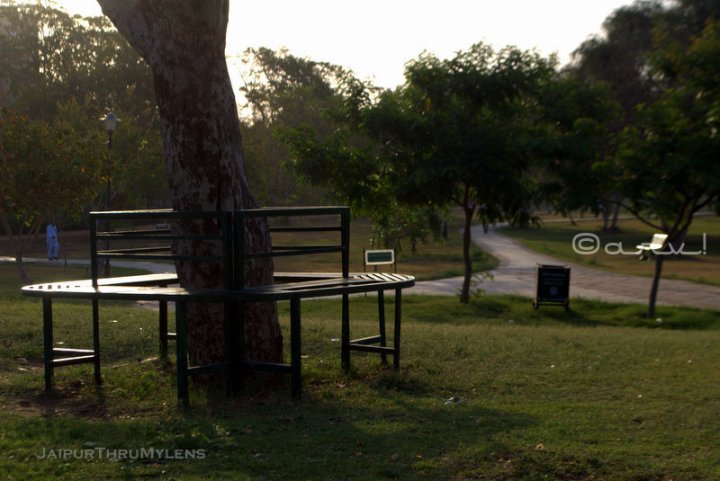 JDA organizes a free yoga camp for the city residents every morning at the flagpole. In the summer, the timing of Central Park Yoga is from 6am to 7am. In addition to this yoga camp, a number of individuals also organize free yoga for the public. One such class is near gate #2. 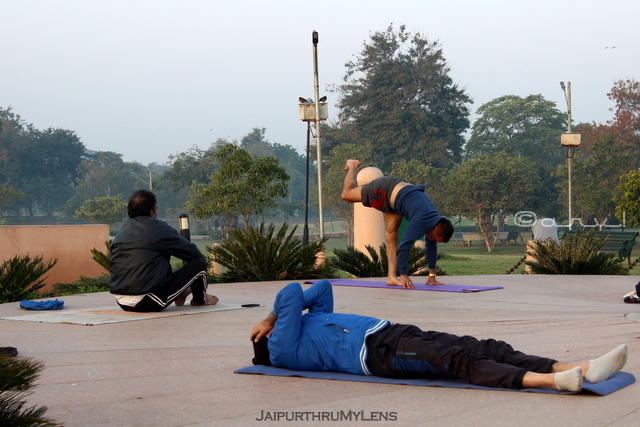 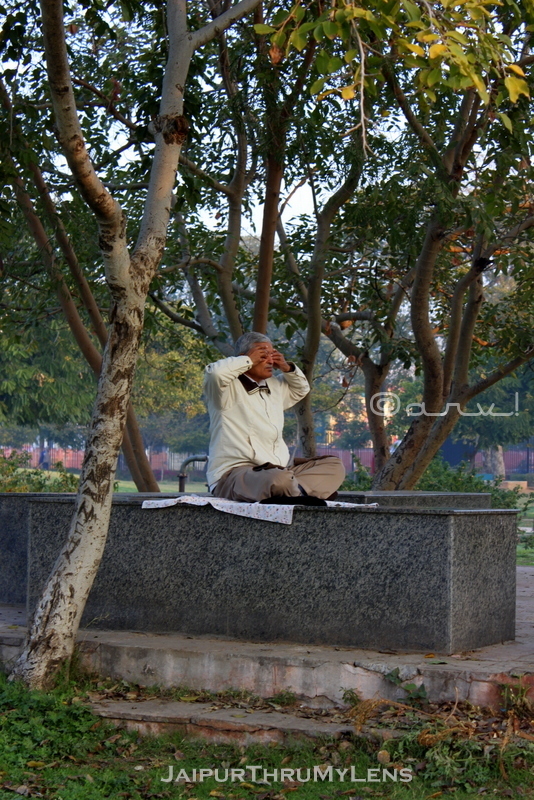 Open-air Gym was inaugurated in June 2016. Another first in the city. Considering that outdoor gyms are popular all over the world, the Jaipur Development Authority has introduced one in the park. As this was a runaway hit among the locals, such gyms were installed in many other parks in the city. 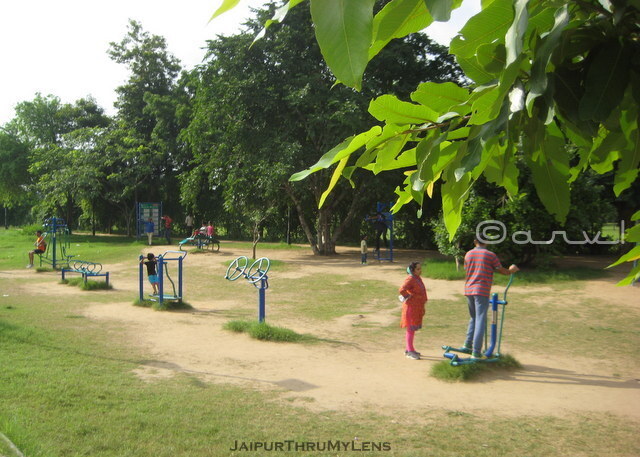 Music in the park 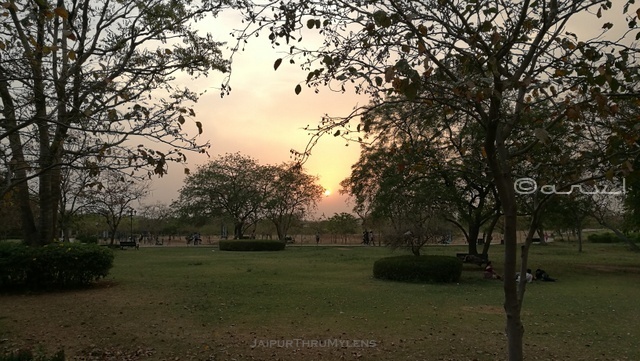 It is not only the joggers and walkers who visit this park. It attracts all kinds of people. Children who like to play, the elderly who want to sit and relax, families who want to have fun moments, friends who want to catch up are just a few examples. 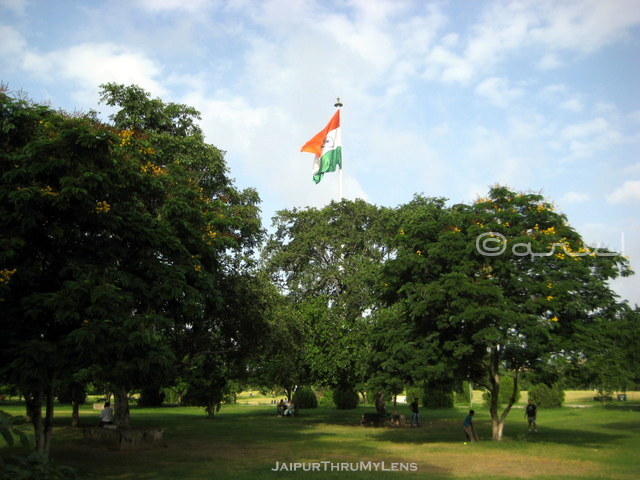 During working hours, the park is popular with lovebirds and a favorite meeting place for direct marketing sales professionals. There are not many city parks that can lay claim to diverse uses. 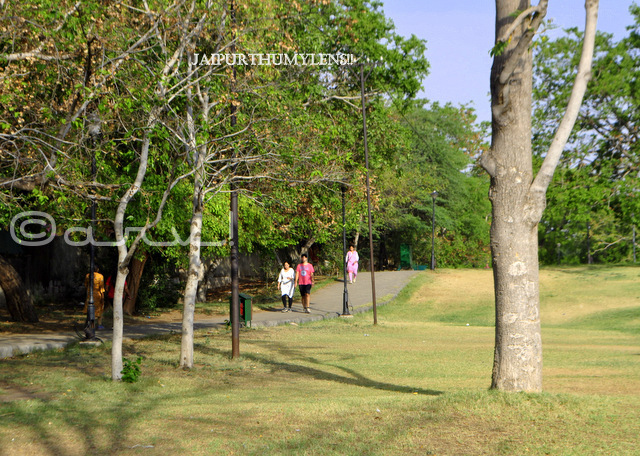 Among the variety of trees in this park, the Chilbil or Bandar Ki Roti Ka Ped dominates the landscape. It is better known as Holoptelea Integrifolia 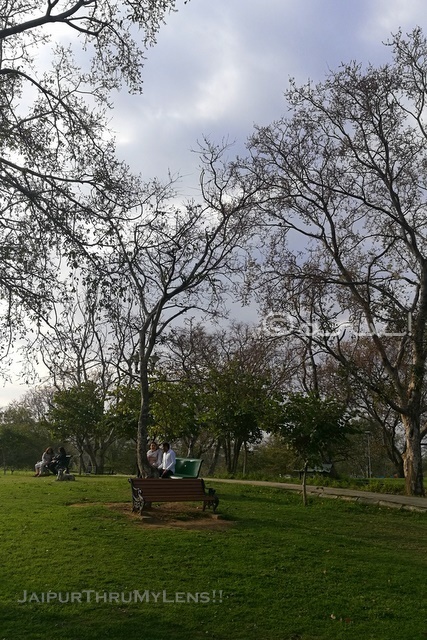 There are hundreds of these trees in the park. It is notorious for causing pollen allergy during the spring season. Other common trees include Peepal Tree, Gulmohar and Neem. One can also find Bougainvillea along the perimeter fence of the Jaipur golf course which runs parallel to the jogging track.

Located in the C-Scheme area, Jaipur Central Park is part of a large square of land with roads on all four sides. It is surrounded by Birla Auditorium, Rambagh Golf Club, Jaipur Polo Club, Hotel Rambagh Palace and Ashok Club. Here is a photo of the golf club. 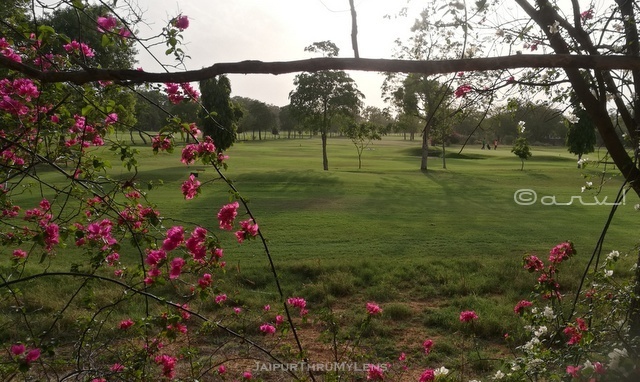 The Polo Club is known as Rajasthan Polo Club and hosts many international Polo competitions every year. It is one of the best polo places in India. Below is a photo of the Polo Club. 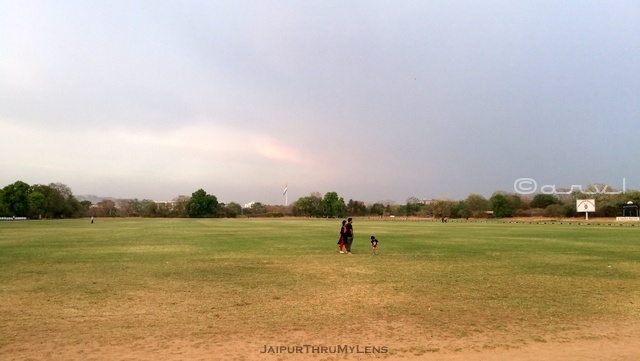 Jaipur Central Park is completely free for visitors. There are five entrance gates to the park. They are as follows:

An additional entrance and parking facility is through the gate of the Rambagh Polo Club/Jaipur Golf Club. Although it is Gate No. 1, people prefer to call this Golf Club gateway. 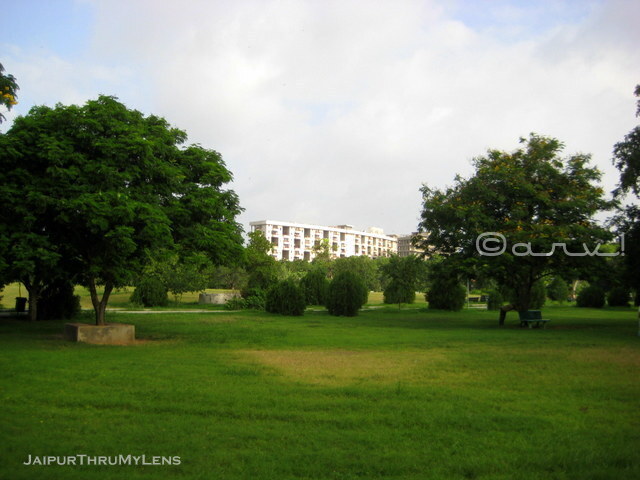 There are four parking spaces at each of the above four gates. Despite this, it is a challenge to find a parking space in the morning hours of 6-8 am. Parking is free until 9am and after 6pm.

Among the facilities are toilets and drinking water available at gate number 1. There are no storage rooms or lockers at the park. Pets are not allowed in the park. Games such as cricket or football are not allowed, but one can play with a small tennis ball and Frisbee. Cycling in the park or jogging track is also prohibited.

Jaipur Central Park is open all week from 5am to 9pm. 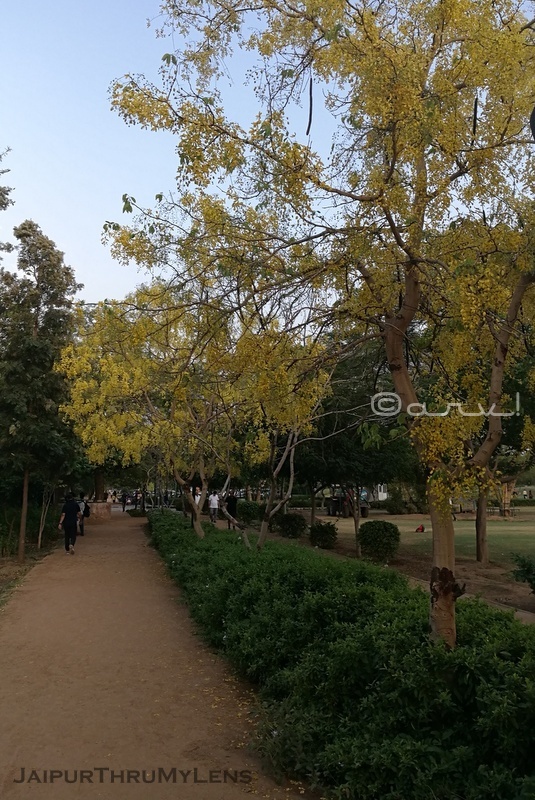 Central Park is popular among people because of the following things:

and finally, do nothing. Sit back and enjoy the solitude in the heart of the city.

Did I forget to mention that I witnessed some amazing sunsets in Jaipur Central Park? This is definitely the best place in the urban jungle to witness a beautiful sunset. Here is a summer season photo of a sunset from Central Park overlooking the Jaipur Golf Course. 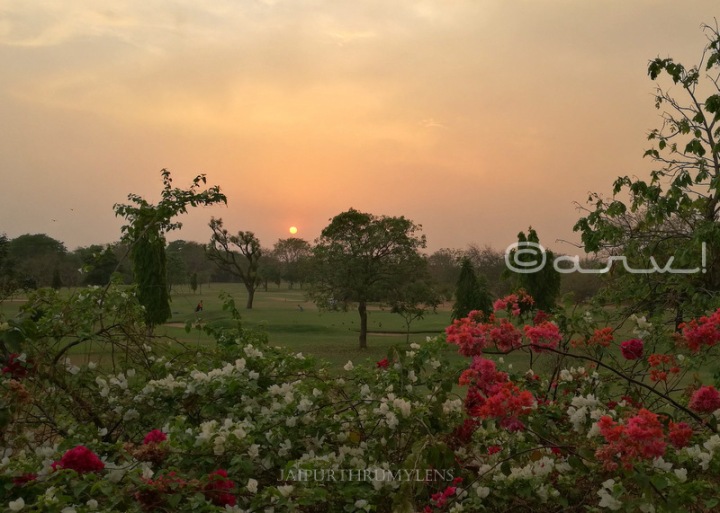 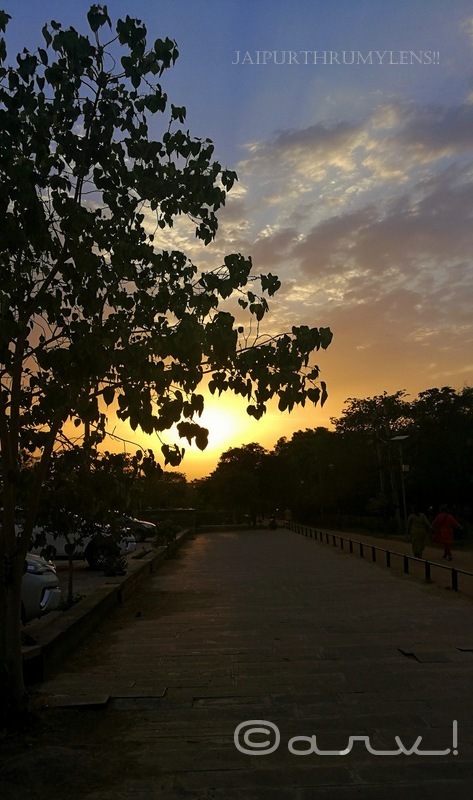 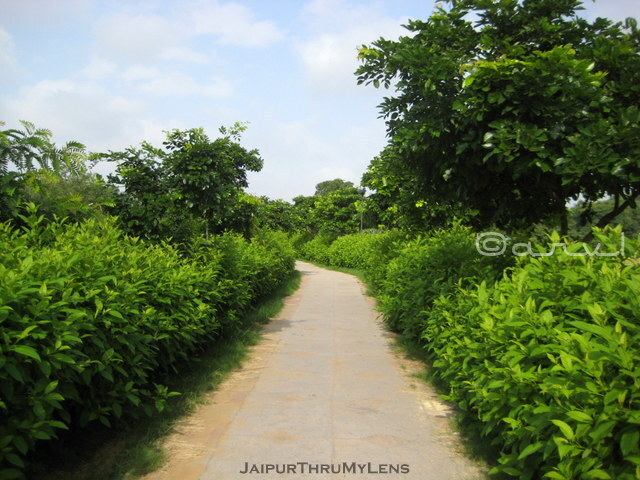 During the morning hours, vendors selling vegetable juice and other healthy foods line up at gate No. 2. This is the best place for them to make good money.

So what makes Jaipur Central Park different from all other parks is the unique atmosphere of the place. It is a melting pot of people from different walks of life and age groups. You will usually see parks in Jaipur full of the older generation, but Central Park is different. This is a favorite park among young runners and joggers. 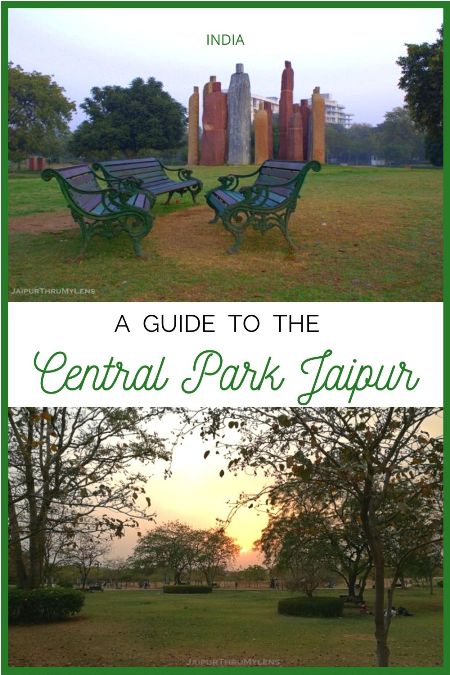